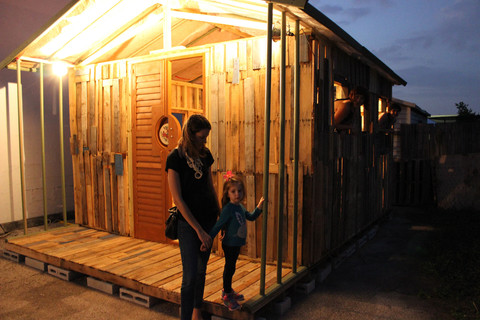 Signal House
"Signal House" is an architectural musical installation
composed of repurposed materials sourced at a re-use center in West Palm, FL. Built into the back wall of the structure is a pipe organ made from railroad tubing. The tubes were cut to different lengths to vary pitch, while the internal components of the pipes were made from discarded motel banister rails. The pipes are fed by air pumped through bellows built into the floor boards. Hand crafted instruments are also hidden beneath the floor boards of this piece.

The interactive structure was created in an underutilized outdoor space situated between the recycling warehouse and the FEC Railroad Tracks.  Due to its proximity to the tracks, the installation was named after the signaling houses that foster communication between train engineers and railroad workers and was influenced by the railroad language of light, color, pulse and rhythm.  Parts of the installation are built to correspond with the passing train.

Beyond being an art piece itself, "Signal House" was built with the intention to serve as a vehicle to house performances, exhibitions and workshops.

This project was made possible through a generous grant from the Cultural Council of the Palm Beaches.